skip to main | skip to sidebar

How to make your house smell good 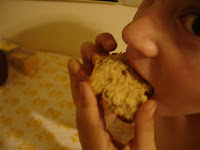 There they were. Two black bananas curling like shrimp in my fruit bowl. Nobody was going to touch them. So I did. I moved them from the bowl, where they threatened to spore up my apples, and onto my counter top, where I let them sit another day. I had a plan. But I didn't know if I could pull it off.

Then on Wednesday night I was struck with a fit of ambition. This happens from time to time. I am truly fearsome to behold when I'm on one of these streaks: I mop the kitchen floor. I finish all my assignments. I write a chapter of my novel. I clean my kids' room. I am organized and clear-headed, capable and up for anything. In these rare moods, nothing is beyond my ability!

Not even banana bread.

And so it was that I brought the kids home from school with a playmate in tow. "Hey kids!" I chirped as they threw their backpacks and sweaters on the living room floor. "Let's make banana bread!"

The two girls didn't say anything, only cast me grave looks that suggested the middle-school years were coming to get me soon.

My children are miserable cretins who don't understand about life-affirming experiences like warm, fragrant banana bread. They don't know from the joys of the thing toasted, and then smeared with peanut butter. They most certainly don't grasp the greatness that is something wonderful made from something horrible and wretched, like two blackened bananas drawing fruit flies in mid-winter.

There is no consensus on what makes the perfect banana. Some like them unblemished, green-tinged, and pulled from the refrigerator. I like them moderately speckled, like this. These are some perfect, fleshy, flavorful specimens. Of course, Deb at Smitten Kitchen writes that these bananas were long gone and so perfect for her banana bread. Hmmm. She does know what she's doing, so who am I to question? (warning: Don't go near her blog if you're at all hungry. The photos alone will do you in) The bananas I used were, um, further along than these. And as has already been well-established here, I don't know what I'm doing. Nevertheless, I had it in my mind that I was not going to waste two perfectly good, nearly rotten bananas.

So out came my How to Cook Everything.

Heat the oven to 350 degrees
grease a bread tin with butter - not too big. What, you think I have measurements on hand?

Amazingly, I had most of this stuff on hand. But only two bananas. And no coconut.

Plop all of this into the bread pan and put it into the oven.
Bake for between 45 and 50 minutes. A toothpick or a knife inserted into the middle will tell you if

it's done or not. Mine wasn't, so back in it went. It ultimately took about an hour and five minutes. But my stove probably sucks.

But half an hour before this my kids started lifting their little noses to the air. "What's the delicious smell, mommy?" And then they started to get excited. The playdate was upset that she had to leave before the bread was done. But I promised I'd bring the loaf to my daughter's Girl Scout meeting the next day. Mostly to get rid of it. It wasn't going to be any good anyway, I reasoned. Might as well fob it off on a bunch of other people's kids. I'm such a bad mom.

I let the bread cool for 15 minutes before turning it out onto a plate. I cut two small slices and offered them up to the fruit of my loins, with milk. They fell on it. They begged for more. I had a piece. Not bad. Functional banana bread. I wondered how it would taste toasted.

The next day I brought the bread to the Girl Scout meeting as promised. There was only enough for a half slice for everyone, and several sniffed dismissively when they heard what it was. "I don't like banana bread," said one girl.

She changed her mind later on, however. In fact, this was the highlight of the year thus far: fourteen 9 and 10-year-old girls loved my banana bread. MY banana bread! And they thanked me. And they asked me to make some more next week. Wow. It filled me with hope. Maybe this will be a breakthrough cooking year after all.

Or not. I'm eyeballing a celery-root puree. Sounds fancy. And where the hell does one buy a celery root, anyway? Stay tuned.

Yum! My husband thinks that all that is missing from my banana bread is chocolate chips but I think that's sort of gross. Any thoughts?

Oh, and if you're hungry today and like chocolate, you definitely should not stop by. I'm just saying.

Julie
Go away. Can't you see I'm trying to concentrate?